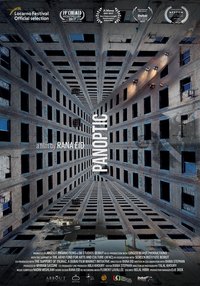 A new take on the genre of city symphony/documentary essay, Eid’s film offers a complex and poetic inquiry into Beirut’s underground and the roots of conflict in her country. (Variety)

Panoptic is a visual work, but Eid’s ability to play these images against experimental soundscapes results in a harrowing, affecting and captivating debut. (4:3 - Four Three Film)

Content
Panoptic is a letter from a daughter to her deceased father in an attempt to reconcile with her country’s turbulent past.
Panoptic delves into Beirut’s underground to explore Lebanon’s schizophrenia: a nation that thrives for modernity while ironically ignoring the vices that obstruct achieving this modernity.
While the Lebanese population has chosen to turn a blind eye to these vices, Rana Eid, an ordinary citizen, explores the nation’s paradoxes through sound, iconic monuments and secret hidings.
In a rare case where the sound landscape of a film dictates the visual landscape, Panoptic is a depiction of the turbulent Lebanese past and the way society copes with trauma.