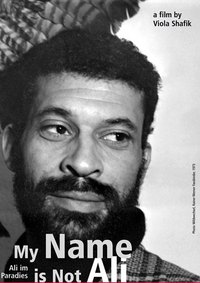 My Name is Not Ali
(Jannat Ali)

This footnote to Fassbinder's ouevre should intrigue the many arthouse types still fascinated by the director's films and life. (Variety)

Content
His anti-racist film Ali – Fear Eats Soul (1973) gained German director Rainer Werner Fassbinder international acclaim. The protagonist, an Arab foreign worker, was played by Moroccan El Hedi Ben Salem M’barek Mohammed Mustafa, Fassbinder’s lover at that time. While the film itself courageously deals with the racism of post-war German society, its makers reproduced the insensibility and invention of the Other, fantasizing their own ‘Salem’. Collage-like, through interviews and archive material, My Name Is Not Ali uncovers the invention of El Hedi Ben Salem by the Fassbinder troupe, an image not revised by most of its members till today.