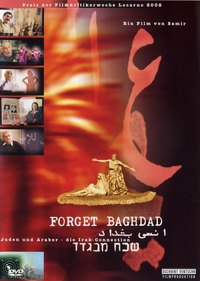 Timely and thought-provoking, "Forget Baghdad" takes a painfully ironic look at five Arab Jews caught up in a violent cultural identity clash. It casts a cold light on racial intolerance in Iraq, where four of the film's subjects were born, and Israel, where they now live. (Variety)


Content
A filmic reflection about the stereotypes of Jew and Arab through onehundred years of film, contrasted with the history of Jewish communists from Iraq. The protagonists are Shimon Ballas, a writer and professor of Arabic studies in Tel Aviv and Paris; the best-selling Israeli author Sami Michael from Haifa; Moshe Houri, a former dealer in real estate; writer Samir Naqqash who only publishes in the Arabic language and Ella Shohat, a Professor of Film and Cultural Studies in New York who has written a standard text on the Israeli film industry.