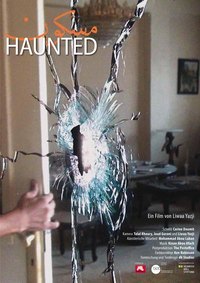 "Haunted" is not a conventional film. Rather, it draws the viewer into the harrowing interim world of refugees and displaced people. (filmdienst)
While many conflict documentaries naturally perpetuate the demarcation between military and civilian actors, Yazji's presentation of her subjects reflects the condition of individuals where that distinction has been effectively eradicated. By challenging the discernibility of that seen through a snipers lens, sovereign verticality is for a moment symbolically refuted. (Ibraaz)

Content
“When the bombs fell, the first thing we did was run away. It was not until later that we realized we had not looked back. We were not allowed to say goodbye to our home, our memories, our photos and the life that was lived within them. We have become vacant like these spaces; our hastily packed belongings and the forgotten things haunt us.” An uncertain existence followed the escape and expulsion from Syria that tumbled into a physical and mental nowhere, a non-space between yesterday and tomorrow. “Haunted” tells of the loss of home and security, of the real and metaphorical meaning which a house, a home has in one’s life.