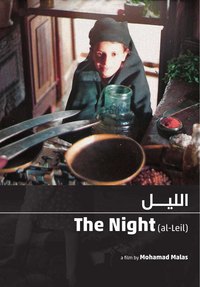 In the end, there are only fragments of memory, says the son. THE NIGHT pieces them together using a visual language of extraordinary potency, combining a range of oriental metaphors with intimate human portraits. Every day life and fortunes of a city and its people. All this and more is captured by the impressive cinematography. Like a cook at an eastern banquet, director Malas has concocteda rare feast of politics and poetry, with a unique spicing of piquant humour”. (Berlinale Journal, 1993)

Content
In the destroyed city of Quneitra is the grave of a resistance fighter for Palestine. His son, the director, tries to restore the dead man’s history by mixing echoes of his mother’s memory and his desire to give his father a more honorable death. Through the daily lives, dreams, fears and hopes of its citizens, Malas chronicles his hometown Quneitra in the Golan Heights between 1936, the year of the first revolts against the British and Zionists in Palestine untill the year of the city’s destruction. He seeks to exorcise a feeling of shame and humiliation that long accompanied the image of his father and also his town, occupied by Israelis in 1967.