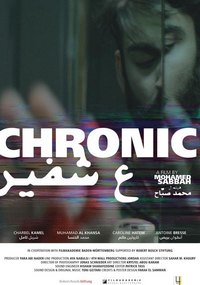 Content
Beirut is a city where any person can experience loss at any moment . Walid lost his hope for love. May couldn't say goodbye to her lover. He died in the sea. Antoine was about to lose his own life.
Omar a photographer lost his male lover in an explosion. He casts the three and invites them to his studio, and together they express stories of sex, love and trauma in the city of Beirut. Visitor after visitor, chapter after chapter, Omar loses control and provokes danger.

"Chronic" was first of all born out of a need and an urge to do it, to write and to film it.
The film results from am accumulation of experiences and stories that I lived and heard in my life and as a citizen of Beirut. Beirut, as I see it and live it, is a city that makes you live with a constant feel, a chronic feel, of losing something or someone. I have always felt that I am on the edge of a big change, on the edge of falling. In the past few years, I went through different stories of loss: I lost a lover, I lost a grandfather and I lost, at some point, hope in Beirut, in Lebanon and in the big childhood dreams. Those experiences marked me hard, they changed the way I look at things and affected my daily and creation behaviors.
Omar and I resemble a lot. The process that Omar adapts in the film resembles my own process as a director and writer of Chronic. Omar followed what he felt, he needed to transmit sensations, to ask questions and to capture and archive stories, emotions and faces. This is exactly what pushed me to do "Chronic" so I can live this same journey through images and sounds.
From the idea till the last steps of the post-production, I tried to conceive the film in total freedom: I wanted to explore a free form and narrative construction. I rarely asked myself big questions of where the film is going. Scene after scene, dialogue line after dialogue line and shot after shot, the film ‘somehow’ constructed itself. From a deep feeling inside of me and with a big trust and connection with the crew and actors, we all went together on this “adventure” as I like to call it. (Mohamed Sabbah)