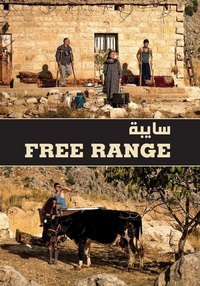 Content
Based on actual events, Free Range is the story of a cow that crosses the border from Israel to Lebanon and meets with 16 year old Malakeh and her family. A  Lebanese Spaghetti-Western that talks about borders and power between people, religions, cows and UN interventions.

"Free Range" is the story of an impecunious Lebanese family living on the border with Israel, a neighbor country that they learned to loathe and fear over the years.  When an Israeli cow surprises the family with an unexpected visit, the family has no choice but milking her, regardless of where she is coming from; hence committing an unforgivable act of disobedience to their local authority and ultimately there is a price that they have to pay.
In Southern Lebanon, the difference is huge between a cow and an Israeli cow, especially to the authorities on both sides of the border. Those who possess their power from the politics of fear they've embedded over the past decades and who continue to spread by any means. A manufactured fear; the fear from the other.
Looking into this family's life at the border, it's a common story not only in Lebanon but in many conflict zones around the world. Land-mines ravage the fields, and the victims are always ordinary people who end up as bystanders in their own lives. Watch them selves torn apart and live observing their slow death. They are the ultimate victims of this manufactured fear.
"Free Range" is a simple but yet a complex story that deals with various topics ranging from borders to cultures, religion, power and politics, and how they mix, merge and match subliminally in the life of ordinary people. (Bass Bréche)