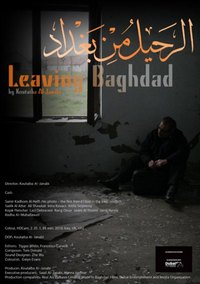 ... this is a chilling insight into the nightmare of having to live with the consequence of one's actions. (Empire)
Koutaiba Al-Janabi introduces his first long feature film with a sensitive, penetrating eye... (Abu Dhabi International Film Festival web-magazine)

Content
Baghdad in the early 2000s: Sadik, a personal cameraman to Saddam Hussein escapes Iraq. Hoping to join his estranged wife in London, he traverses several countries, is passed on from one smuggler to the next. The disappearance of his son, who did not share his father's enthusiasm for the regime, and scenes Sadik had filmed for work, haunt him alike whilst he tries to find his way out of the omnipresent and tormenting shadows of the regime.
As footage shot by fictional Sadik, Koutaiba Al-Janabi weaves real footage from Saddam Hussein's now accessible archive into his documentary style, slow paced fiction.