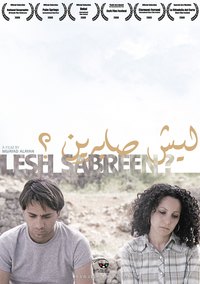 Content
In today's Jerusalem, a young Palestinian couple navigates dreams through economic hardship, a conservative society and a surrounding Israeli occupation weighing on them.

The director about the film
The stories, events and characters that make up 'Lesh Sabreen' represent the experiences of an entire generation of young Palestinians, specially Palestinian Jerusalemites like myself. It shows the interplay between social, economic and political factors that seem to subconsciously reinforce each other and limit the young Palestinians' prospects and hopes for the future. [...]
'Lesh sabreen' was shot on location in my village, Beit Safafa, the only Palestinian village to survive the 1948 war and remain in west Jerusalem. It is now considered a neighborhood of the larger city of Jerusalem but the contrast between its village nature and its surrounding commercial centers and Israeli settlements is still very clear. The contrast in landscape and space is captured in the film. We tried to show the older and organic Palestinian village nature with its old and sometimes run-down houses, its fields and its animals, and the larger scale modern surrounding areas. The contrast in landscape and space symbolizes in a lot of ways the economic and political status of the Palestinian community in the city. As in the case of many independent filmmaking projects - Palestinian films included -the 'Lesh Sabreen' team faced many obstacles from limited budget to lack of access to equipment. However, working on this film in a village community like Beit Safafa opened my eyes to a unique and special style of independent filmmaking which builds on the talents and resources from within the local community and its grass root village culture which is very generous and supportive but also very much about pulling the community together to do what a single person cannot do alone. My father fixed the cables for the gaffers. My cousin, who is an expert in setting up village weddings and outdoor family parties, was our location manager. My mother, my aunts and their neighbors took care of the catering. Many people were also eager to invite the crew into their home for meals. Add to that the non-professional actors from the village who became part of the cast and the many more extras volunteering to be in the film. (Muayad Alayan)