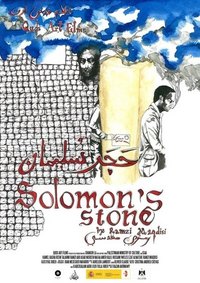 Ramzi Maqdisi’s black-comedy short, “Solomon’s Stone,” could be considered a parable of present-day Jerusalem and the nationalistic politics fueling the violent dynamic between Israel and the Palestinians, occupier and occupied. (Palestine Square)

Content
Hussein, a Palestinian young man, receives a letter from the Israeli post office to appear in person to receive a package. He has to pay the sum of 20.000 $ US dollars in order to collect that package. Hussein’s curiosity to find out what the package contains drives him to sell everything he owns, despite the outright rejection of his mother, the matter that changes their lives afterwards.
The story is adapted from the novel Blue Light by Hussein Barghouty.