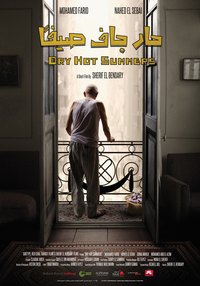 Content
Two lonely people at opposite chapters of life accidentally meet on a busy summer day in a Cairo taxi. Frail old Shawky and bubbly young Doaa are both caught up in their busy routines as their race through the city evolves into a journey of self-discovery that reconnects them to life.

The Director about the film
While I was working on the development of my first feature film "Two Rooms and a Parlor", I came across the first draft of "Dry Hot Summers". I do not exaggerate when I say that for quite a period after reading it I found my heart and my mind hanging around with the idea. I couldn't stop thinking about it, so I decided I wanted to make it no matter what – even though I did not write it myself as I did with my previous short films, but it felt so much to be tied to them in the same chain.

It shares with my previous films the theme of loneliness and isolation and the search for a moment of relief. As in my previous films the main character is in a permanent search for something, even if it is a very simple thing. It is that same thing that drives forward the course of events until we recognise the personal motivation behind that journey through a process of self-discovery. It's not just a search in vain, but it's more about the feelings of loneliness and isolation that invades us in certain moments of our life, which we try to avoid and soothe until we understand the reasons for it. [...]

In "Dry Hot Summers" Shawky is looking for his plastic bag that contains tremendously important medical documents, to find out through his quest to which extent he is lonely and isolated. Nevertheless the journey itself becomes one last chance to forget the pain of his existence.

Doaa and Shawky are two real personalities that we know well and we see them or their peers every day in the streets of Cairo but we do not talk about them or see them. This is a Cairo we do not see in the movies, and those are the characters that Egyptian mainstream cinema tries always to ignore.
Doaa and Shawky are two characters who have a strong connection to their time and their place. They are the people and the real product of that city. Shawky, who grows cancer in his body from the excessive environmental pollution and Doaa, who because of her slightly advanced age decides to take marriage arrangements in her own hands, even if she's without a family who can support her.

In this very special day, which reflects a crucial turning point in the life of both of our characters, their paths intersect. It's the day in which the doctor is going to tell Shawky how long he can expect to live. It's also the last day for Doaa in her city before getting married and moving to another place. Through this brief meeting between both characters, and the simple details of daily life, they both discover a new aspect in their lives which are not that isolated. So even if it is not a Happy End, it is a much more realistic end in the fact that we can watch them going from a passive part into a more active and they become more awake to their situation. It is the subtle beauty of real life. (Sherif Elbendary)