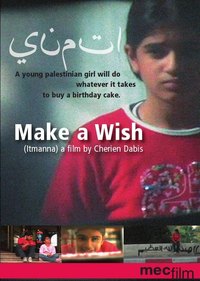 ...reinforces the power of short films and the ability to achieve cinematic greatness within the span of a few minutes. (Film Threat)
Very moving and thought provoking. (The Austin Chronicle)
It is the natural, often charming, performances that give this 12-minute film its heart. (Eye for Eye Film)


Content
A young Palestinian girl will do whatever it takes to buy a birthday cake. Eleven year-old Mariam begs her mother for the extra money she needs to buy a cake at the local bakery. Her mother begrudgingly relents, but when Mariam arrives at the bakery, she realizes that she still doesn't have enough. Determined to get the cake, she sets out to brave the obstacles and land some cash. What begins as a simple trip to the bakery turns into a journey that depicts not only the subtle tensions of a politically charged environment, but also illustrates the grief that can result from growing up under occupation.

Thematically, Make A Wish explores the devastating impact of political conflict and war: love, loss and grief on a deep, personal level. It offers a glimpse into a family working through expressions of grief, each member dealing with it in a vastly different manner. The film is both a celebration of life and a work of mourning. (Cherien Dabis)