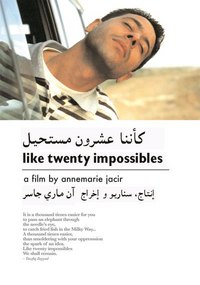 Succinct and powerful..... (Film Comment)
Like the politics it discusses, it is resolutely, and brilliantly, inconclusive. (Time Out)

by the director of The Salt of this Sea, When I Saw You and Wajib

Content
Occupied Palestine: A serene landscape now pockmarked by military checkpoints. When a Palestinian film crew decides to avert a closed checkpoint by taking a remote side road, the political landscape unravels, and the passengers are slowly taken apart by the mundane brutality of military occupation. Both a visual poem and a narrative, like twenty impossibles wryly questions artistic responsibility and the politics of filmmaking, while speaking to the fragmentation of a people.

The director about the film
I wanted to explore the reality of life under Israeli occupation and at the same time to question what it means to be an artist and filmmaker under these harsh realities where filmmaking is a privilege and where simple movement is a privilege. The fact that it's a film about a film is not only meant to critique the filmmaking process itself but also to show how memory and nostalgia (of the character of 'Anne-Marie') play a part in all this. I also wanted to comment on, or rather poke fun, at the tendency of filmmakers to appear in their own films, and somehow becoming the heroes of their own story.
In addition to exploring what it means to be an artist from an occupied country, I also wanted to ask questions about the very act of filmmaking itself. It seemed quite natural that just as the elements of film cannot work when separated from each other (sound, picture, the actor etc.), so does the breakdown of communication and of unity amongst the crew of Palestinians themselves once they are separated from each other.
By the end of the film, the entire thing falls apart; with sound separated from image, the actor arrested, and the director leaving. I found that cinema was a perfect metaphor for what is happening in Palestine today and has been happening for the last 57 years. By the end of the film, because all the elements are town from each other, there is no film. There cannot be a film. (Annemarie Jacir)